Eilean Donan Castle is in the Scottish Highlands.  It is reported to be one of the most photographed Scottish castles, and no wonder.  The setting is straight out of a novel and every angle reveals a different aspect of the castle, moat, bridge, lake, and mountains.

As one of the most iconic images of Scotland, Eilean Donan is recognised all around the world. Situated on an island at the point where three great sea lochs meet, and surrounded by some majestic scenery, it is little wonder that the castle is now one of the most visited and important attractions in the Scottish highlands.  (From the Eilean Donan Castle website) 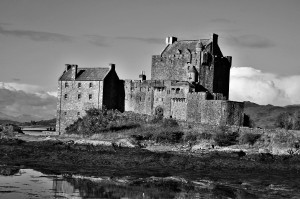 In color or black and white, this castle is impressive.  The first occupants lived there in the 6th century.  It was added on to and fortified in the 13th century and stood guard over the surrounding lands until the 17th century when part of it was destroyed in a Jacobite uprising.   “Eilean Donan lay in ruins for the best part of 200 years until Lieutenant Colonel John MacRae-Gilstrap bought the island in 1911 and proceeded to restore the castle to its former glory. After 20 years of toil and labour the castle was re-opened in 1932.”

I am still overwhelmed with touching, breathing, feeling history in every pore rather than reading about it in a history book.  Seeing a place with your own eyes draws a person in and enters their footsteps alongside those who loved and lived and breathed there through the centuries.  It is perfectly situated where three lochs come together, a strategic masterpiece over 1400 years old. 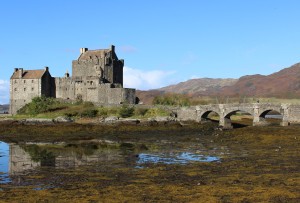 We were there in mid day when the tide was out. I photographed it from as many angles as I could get in a short time.   I would have loved to see it when the water was in.  I’ve also imagined it at sunrise, sunset, in the spring, winter, and late fall.  I’m sure those who have easy access return many times.

So, what did I learn from this beautifully situated castle?  It reminded me of a vision God showed me once about a diamond.  Many people can be looking at the very same stone, but depending on where they are standing and which angle they see, the stone may look very different to one and then another.  The classic round topped solitaire that has graced so many engagement rings looks flat from the top, conical from the side, and spiked from the bottom.  Every facet of a diamond refracts the light in fire and ice, different colors from different directions.  Eilean Donan was like this as well.

In a bigger picture, we are the diamonds that others see through different eyes.  We have many facets and that allow people know us in different capacities during our life.  We are the castles, the temples of God, who change in seasons and lighting, yet we stand solid in the life in which God placed us.

When we look at other people and try to decipher who we think they are, we need to remember that each human being is a multi-faceted beautiful creation, made in the image of God.  There is more than one side, more than one perspective, more than one season in each life.  Ephesians 2:10 says, “For we are his workmanship, created in Christ Jesus unto good works, which God hath before ordained that we should walk in them.” 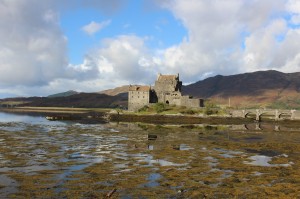