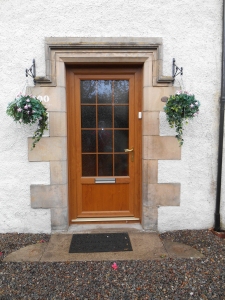 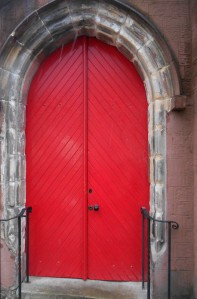 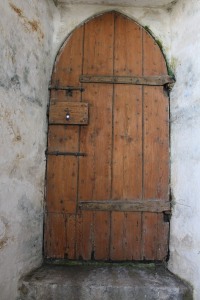 Most of us have probably watched the TV game show where the contestant tries to figure out which door has the greatest prize behind it.  Sometimes the door opens to reveal a fabulous trip, a new car, or a brand new kitchen.  At other times behind the door is a giant box of cereal, a donkey, or a broken down bicycle.  A laugh or a thrill was behind every door (as long as we were the viewers and not the receivers).

Wouldn’t it be great if all of the RIGHT doors with the biggest pay offs were  flaming red?  As hard as we might try to make the best choice, sometimes we get the donkey instead of the car!

On our recent trip to Ireland and Scotland, I found the doors fascinating.  Where I live, doors are usually not that notable.  They are metal or wood, usually a drab color, and sometimes dressed up with a wreath.  Not so in those two beautiful countries.  Doors were as many and varied as the landscape.  It made me want to come home and paint my own door some brilliantly cheerful color.  (Which I haven’t done yet.)

There are times in life when it doesn’t matter which door we choose.  They all lead to the same destination from different approaches.  But there are other times when choosing the right door makes all the difference.  Those are the doors I wish were painted red or enhanced with something so ornate it immediately would get our attention. 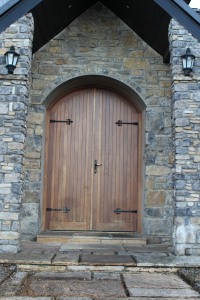 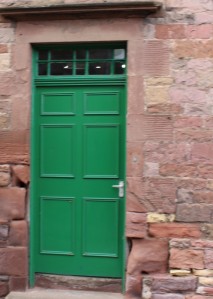 Door are symbolic of so many things… as many as our imagination produces.  The Bible has a lot to say about doors.

Revelation 3:8 -“‘I know your works. Behold, I have set before you an open door, which no one is able to shut. I know that you have but little power, and yet you have kept my word and have not denied my name.

Behold, I stand at the door and knock. If anyone hears my voice and opens the door, I will come in to him and eat with him, and he with him.

“Truly, truly, I say to you, he who does not enter the sheepfold by the door but climbs in by another way, that man is a thief and a robber. But he who enters by the door is the shepherd of the sheep. To him the gatekeeper opens. The sheep hear his voice, and he calls his own sheep by name and leads them out. When he has brought out all his own, he goes before them, and the sheep follow him, for they know his voice. A stranger they will not follow, but they will flee from him, for they do not know the voice of strangers.”

Psalm 24:7 – Lift up your heads, O gates! And be lifted up, O ancient doors, that the King of glory may come in.

Many times we pray after we have opened the wrong door in our lives and desperately trying to go back to the moment before we opened or search diligently for the right door only after we’ve opened the obviously wrong one.  Wouldn’t it be so much better if we learned to pray and seek God’s voice before we open any new door in our lives including new relationships, new business ventures, new job choices, or major purchases?

Father, lead us to the right doors in our lives that no man can shut and only You can open.